Battery grips might not have the glamour of
lenses or Speedlites, but they are useful
accessories. What do they do? Do you
need one? And which of the many different
Canon battery grips is compatible with your
digital EOS camera? 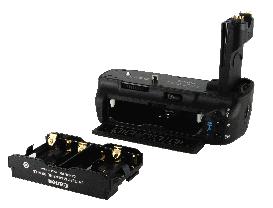 What is the point of a battery grip? There are several points, but many photographers buy a battery grip simply because it makes the camera easier to hold.

The battery grip extends the camera grip – not by very much, but enough to make a difference if you have large hands. If you can only get two or three fingers around the grip on just the body, you should be able to use three or four fingers when the grip is attached. 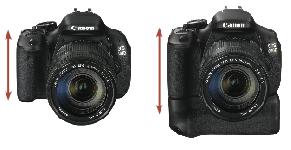 There is a certain irony here. Canon provides us with smaller and smaller consumer cameras in response to consumer demand, and then we make the camera larger and heavier by attaching a grip.

If the camera is being used with a small lens, a grip might not be needed. However, if you are using a larger lens, a grip will improve the handling. 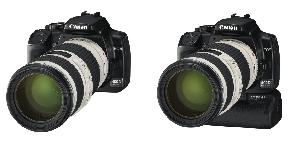 Incidentally, although none of the cameras shown here is fitted with a strap (it makes the photos look messy), a battery grip is not an alternative to a strap. Always use a camera strap, whether or not a battery grip is attached, or face the expensive consequences.

More power to your camera

All the digital EOS battery grips let you fit two camera battery packs. One battery pack is supplied with the camera. If you buy a second battery pack and insert both into the battery grip you will get twice the number of shots given by a single pack.

For most photographers, this is probably one of the least compelling reasons to buy a grip. A single battery pack will give you anything between 500 to 1000 shots, depending on the camera and how you use it.

If you buy a battery grip to improve the handling of your camera, you can use it with just a single battery pack inserted – the battery you have removed from the camera. Everything will work normally.

You need to ask yourself if you regularly shoot more than 500 or 1000 images in a day. Some people do, but for many users a single battery, fully recharged the night before a photo shoot, is adequate.

However, some photographers like the security of a spare, fully charged battery – just in case. This is not a bad idea. If you have a spare battery and a battery grip, you might as well keep both batteries in the grip – unless you find the extra weight of the second battery a problem.

When you hold the camera for landscape format images, all the camera controls fall naturally to your left hand. If you turn the camera through 90° to the portrait format you normally have to move your hands with the camera – and this is awkward for some people. However, with a battery grip fitted you can make use of duplicate camera controls on the grip to keep your hands in a comfortable and natural position. 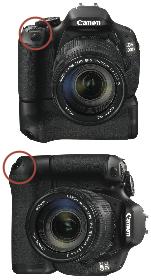 Right The camera shutter button and main dial are duplicated in the bottom corner of the front of the battery grip. This becomes the top corner of the camera when rotated through 90° to take photographs in the vertical (portrait) format. It means that whether the camera is in the horizontal or vertical format, the button and dial are always in the same position under the index finger of your right hand.

There is an on/off switch on several Canon battery grips. This does not, as you might think, turn the grip on or off. With the switch in either position the grip continues to power the camera, allowing you to fire the shutter. The switch enables or disables the set of camera controls on the grip, so that you do not accidentally trip the shutter button or main dial on the battery grip when using the controls on the camera body.

Some Canon battery grips have a rear door which opens to reveal the battery compartment (below left). If you are using the camera battery packs, these are inserted directly into the grip. The grip will provide power to the camera with either one or two packs in place. A separate magazine is provided for use with six AA batteries. The loaded magazine is inserted into the grip.

Other Canon battery grips use magazines which are inserted from the side (above right). Two magazines are provided: one is for camera battery packs (one or two can be used with the grip), while the second is for six AA batteries. Fewer images can be shot using AA batteries than when using the camera battery packs. Always remove batteries from the grip when it is not attached to a camera.

We started compiling a table showing the number of shots you can get from a fully charged camera battery, but soon gave up. That’s because there is no consistent data available across all cameras. Some data is for exposures with no flash usage, some for 50% flash usage – many specifications give both sets of figures, but where only one set of data is given it is not always clear whether it is with or without flash. In any case, the figures are only a rough guide. They are produced under consistent conditions, but you are very unlikely to be shooting under identical conditions.

A useful feature of all the battery grips is that you can take the camera batteries out and insert six AA/LR6 alkaline batteries.

A set of fully charged alkaline batteries will only give you about half the number of shots provided by a fully charged camera battery – so why bother? Well, if you are travelling and your camera battery becomes exhausted when you are miles from a mains power supply, you will probably be able to buy suitable AA batteries from a local store or gift shop.

Join EOS magazine today
from only £24.95 a year